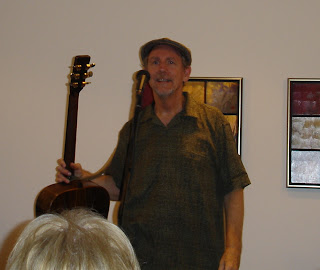 Posted by Peter at 11:30 AM No comments: Links to this post

One of the newer house concert series in our area of So Cal is Boney Mountain House Concerts. Steve Brandick and his wife Yolanda have been inviting folks to their home to appreciate the area's best acoustic acts for just over a year now. Their lovely home is located in Newbury Park at the foot of Boney Mountain and may be the prettiest setting for a house concert that we have ever seen. The Brandick's schedule of house concerts is less frequent than some, with about four concerts a year, but the quality of talent is top-notch. This past Saturday was our second visit there and we're sure we'll be back often.

Both times we have been at this venue the suggested donation has been $15 each, paid house concert-style into the bowl at the front door. The room for the concert is a multi-use room in its daily guise, with the back section in the kitchen area and the "stage" and front section I'd guess to be a dining room/family room. Can lights over the "stage area" simulate real stage lighting to good effect and there is a small house PA system. The seating area has about 60 or so seats and is one of the smaller capacity homes where we've seen a show. And probably the only criticism I could offer is that the basic folding chairs are very uncomfortable, but I know they are rentals and with such a small room, the only way to make money for the acts is to pack them in. Besides, we are all supposed to suffer for art, aren't we?

The most unique thing about the Boney Mountain House Concerts is the opening act. Steve Brandick is quite an accomplished singer/songwriter/guitarist and performs a very short set before his acts take the stage. He really is quite good, his songs very entertaining and he is often very funny but also does serious music too. His songs tend to be bluesy which suits his voice perfectly. I would be delighted to hear a full set sometime.

With that one notable exception, the rest of the operation is fairly typical house concert procedure. Two sets with an intermission for potluck appetizer/dessert, mingling, meeting the artist and of course, most importantly, buying a CD or two and getting them signed! There is wine there and the hosts graciously have coffee in the kitchen. And their backyard!!! Let's just say, Becky always leaves there with a severe case of backyard-envy. On our first visit it was an amazing work-in-progress and now finished its incredible with a great big porch, beautiful plantings and more hummingbirds than I have ever seen in one place. And the view is postcard worthy. We are ALMOST sorry when its time to go hear more great music.

This last time we were there, Steve announced he would be doing 4 concerts in the next year and is relying on his upcoming trip to the FAR-West acoustic music convention to shop for acts. Based on the quality of the acts he has picked thus far, I'm sure next year's music will be memorable. And in this warm friendly atmosphere I'm sure we'll be there to enjoy it as often as we can.
Posted by Peter at 6:57 PM No comments: Links to this post